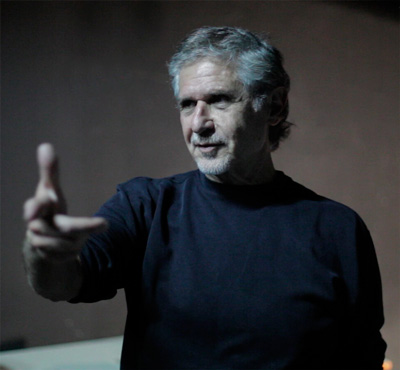 Born in São Paulo, in 1943, Leonardo Kossoy attained a degree in law from Universidade Mackenzie. In the 1960s, he turned to literature and the visual arts, eventually becoming a member of the cultural vanguards. Sometime later, he set other activities aside to devote himself exclusively to photography.“Kossoy’s connection with poetry and, in particular, with Jorge de Lima’s oeuvre imparts a touch of tragic baroque to some of his photographs,” art critic Paulo Herkenhoff wrote, stressing the fact that Kossoy sustained a dialogue “with details from paintings by Tintoretto, Titian or Veronese.” Interdisciplinary motivations involving literature, photography and painting came up in a more recent phase, when Kossoy embraced the study of elements in the paintings by Caravaggio and Francis Bacon – in particular, the settings of perspective, framing and lighting.

Leonardo Kossoy travels regularly to photograph in the Mediterranean, inspired by literary and mythological references. A poetic gaze emerges from the connections between photography and literature that informs his work. As an avid reader of travel writer Patrick Leigh Fermor, Kossoy has addressed the issue of travelers and boundaries in works shown in the exhibition “Disorient: The Nomadic I” (2006/ 2007). In the Mediterranean, he has further deepened his relationship with geography, history of art and photography through poetic excerpts from reality.

Between 2011 and 2013, he produced the photo series “Only You”, curated by Fernando Azevedo and shown at the Instituto Tomie Ohtake in 2014. Subsequently the exhibition traveled to Centro Cultural Correios, in Rio de Janeiro; Palácio dos Correios, in Niterói (RJ), and Centro Português de Fotografia, in Oporto (Portugal). The latter opened the European tour of Kossoy’s “OnlyYou”. On February 16, 2017 it will open at MUVIM –Museo Valenciano de la Ilustración y la Modernidad, in Valencia, Spain.